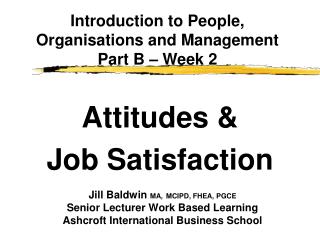 Introduction to People, Organisations and Management Part B – Week 2. Jill Baldwin MA, MCIPD, FHEA, PGCE Senior Lecturer Work Based Learning Ashcroft International Business School. Attitudes & Job Satisfaction. Learning outcomes. By the end of this session you should be able to:

Customer Satisfaction in TQM - . engr mian khurram mateen. customer satisfaction. the asset of any organization is

Attitudes By Dave Batty - . attitudes. 5 th edition by dave batty this powerpoint is designed to be used with the group

Employee Satisfaction: What do we do with the data? - . mary tellis-nayak, rn, msn, mph vp quality initiatives my

Attitude Formation and Change - . what is an attitude?. a learned predisposition to respond to an object or a class of

Constraints Satisfaction Problem - S.p.vimal bits-pilani to discuss what is csp? backtracking for csp local search for