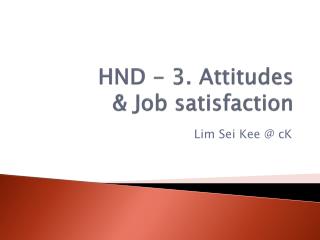 HND - 3. Attitudes & Job satisfaction. Lim Sei Kee @ cK. ATTITUDES. Evaluative statements or judgments concerning objects, people or events. Reflection of how one feels about something. Component: Cognitive – The opinion or belief segment of an attitude.

Color sorters - Qed is one of the leading company in manufacturing of color sorters machines based in bangalore india. we

Latest Breaking News-How To Determine It’s Authenticity? - Knowing about the happening around the world gives us a

Harold Soto - Born and raised in the dominican republic, harold soto is an international businessman with over 20 years

You re not going at that A qualitative study to explore new mothers attitudes, beliefs, and values around their dec

Digital Health Workshop 8 February 2018 - . why we are here. how can we support patients in using digital technology to

Look, who is the most successful in attracting and holding good people The nonprofits. The satisfaction has to be great

All Marketing decisions are designed on the basis of Customer Focus - . customer profile:. outline of the type of