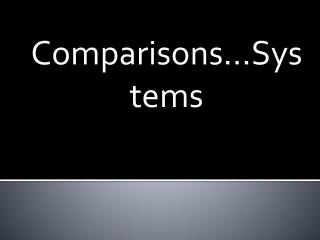 Comparisons…Systems. Electoral Systems: Single Member District Plurality vs. Proportional Representation. How the votes get counted or who gets a seat in the legislature. Parliamentary vs. Presidential System. How the executive branch is born. Unitary vs. Federal System.