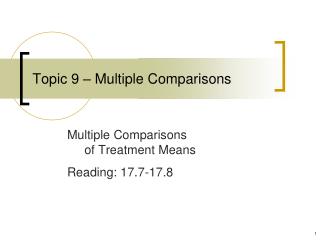 Linear Contrasts and Multiple Comparisons - One-way layout example. a study was performed to examine the effect of a new

Multiple Comparisons in Factorial Experiments - . if main effects are significant and interactions are not significant:

~! PPT.#9!~ - . by:cassidy barnette . franchise. an authorization granted by a government or company to an

Multiple Comparisons: Example - . study objective: test the effect of six varieties of wheat to a particular race of