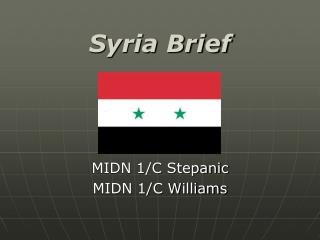 Syria Brief. MIDN 1/C Stepanic MIDN 1/C Williams. Map of Syria. History. Syria has been a country of conflict. Syria has been under the rule of many ancient empires. Rome, Persia, Egypt, and Babylon Came under Turkish rule in 1516 and remained under their control for four centuries.

Sorting out Syria - . step 1 find out about syria by asking great questions. step 3 make a difference by persuading our

Learning About Syria: - . a guided presentation for classroom use. syria :. the basic facts. syria is a country bordering