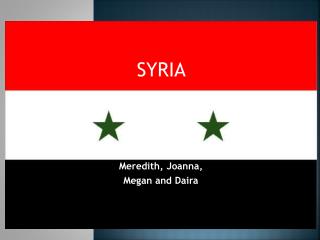 Syria. SYRIA. Meredith, Joanna, Megan and Daira. Basic Information. The Capital of Syria is Damascus. Damascus was established in 2500 B.C. and is the oldest capital in the world. The Current Syrian President is  Bashar al-Assad Syria is located in Western Asia.