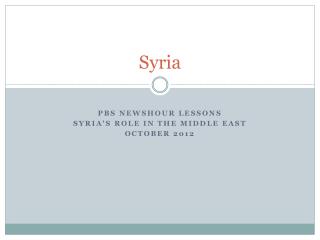 Syria. PBS Newshour Lessons SYRIA'S ROLE IN THE MIDDLE EAST October 2012. Since 1970 , the Ba'ath Party has remained the sole authority in Syria, and Syrian citizens may only approve the President by referendum They do not hold elections!