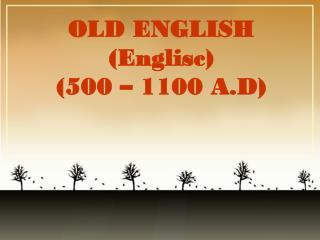 OLD ENGLISH (Englisc) (500 – 1100 A.D). OLD ENGLISH / ANGLO SAXON. ORIGINS AND DEVELOPMENT OF ENGLISH. The history of the English language really started with the arrival of three Germanic tribes who invaded Britain during the 5th century AD.