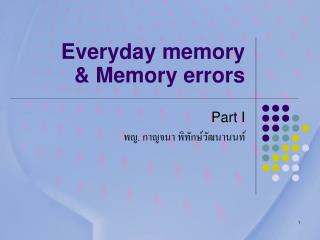 Everyday memory & Memory errors. Part I พญ. กาญจนา พิทักษ์วัฒนานนท์. Everyday memory. memory Is not just a “ stamp pad of experience ” Is a place where information comes in Is automatically stored for future reference Experiences become encoded Biopsychology of Memory - . what is memory?. the storage of information about our experiences. major research questions.

Unit 2 – Memory - . section 1: memory processing. what is memory?. the ability to remember things we have experienced,