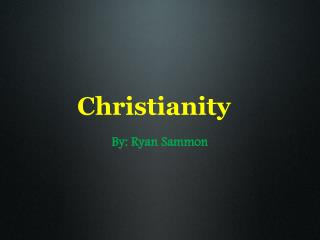 Christianity. By: Ryan Sammon. Some History.

P Terms - . what’s the term?. #1) from the latin term meaning “a country-dweller”; within the christian world, a

CH 511 – The History of Christianity 2 - . unit four slides based in part on the story of christianity by justo

Christianity Under the Siege of Neopaganism - . four myths evangelicals love . myth # 1: music is neutral and amoral

The Persecuted Church - The history of christianity. the persecuted church. © john stevenson, 2008. why don’t people