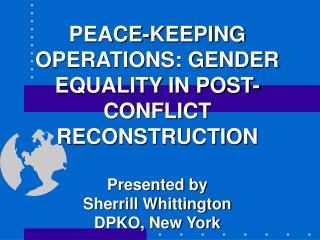 PEACE-KEEPING OPERATIONS: GENDER EQUALITY IN POST-CONFLICT RECONSTRUCTION Presented by Sherrill Whittington DPKO, New York. Women and Conflict. Civilians - the vast majority of them women and children - are increasingly the targets of war.

The Reconstruction Era (1865-1877) - . think about: what lasting consequences arose from the struggles over

INTERPERSONAL CONFLICT - . the prisoner’s dilemma. a model of conflict. goldman ( 1966) presented a cycle of conflict

Reconstruction (1865-1877) - . the effort to rebuild the southern states and restore the union was known as