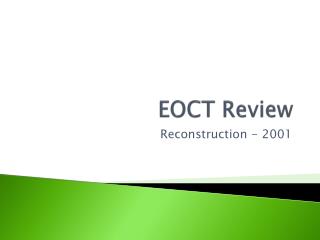 EOCT REVIEW - . the nation of keilmanland needs to build a new dam to control flooding near its larges city. if

EOCT Review! - . name that term:. fluctuations in economic activity, such as employment and production. the business

EOCT REVIEW - . domains 3 and 4 physics. energy. a measure of the ability to do work measured in joules whenever work is

EOCT Review - . biology eoct: may 14 th , 2013. cell structure. what is the difference between a prokaryote and

EOCT REVIEW - . ninth grade pre-ap lit. which word or words should not be capitalized?. a french b summer c senate d