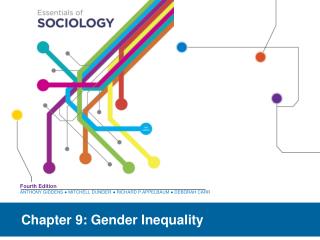 Chapter 9: Gender Inequality. Gender Inequality. Overarching questions. Is gender biological, social, or both? Why is power invested in the male category? What does gender inequality look like and why? Why is gendered violence so commonplace?. “Gender warrior”. 4. Sex and gender.

The role of men in challenging gender inequality in the context of HIV? - . tim shand, sonke gender justice network,

Chapter 12 - . gender. what is gender?. sex is being biologically male or female gender is the social psychological

GENDER DISPARITY - . by sebastian . gender. gender is a concept that refers to roles and responsibilities that are

Chapter 4 Gender Inequality - . what is gender?. gender: the meaning a society attaches to being male or female sex: the

Chapter 10 - Chapter outline. the global context: the status of women and mensociological theories of gender