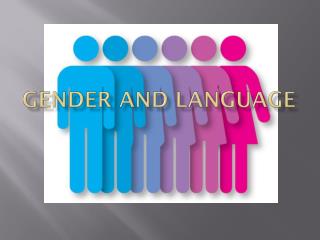 Gender and Language. Sexual Differentiation. We know that both sexes have different interests and enjoy different activities just like women are drawn to certain colours than men. This means that men and women do vary in their lexicons and semantics.

Is Gender Trouble? - . what is gender?. to answer the question is gender trouble, you must first understand what gender