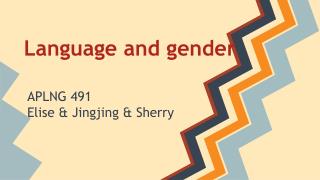 Language and gender . APLNG 491 Elise & Jingjing & Sherry . Size of the word: the strength of the correlation with gender Color: relative frequency of usage Words and phrases are in the center Topics : represented as the 15 most prevalent words, surround. Language and gender .