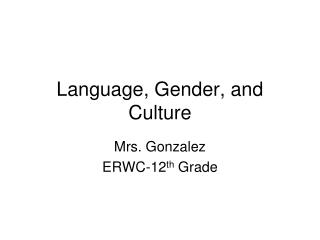 Language, Gender, and Culture. Mrs. Gonzalez ERWC-12 th Grade. Anticipation Guide. Please read the sentence and put an honest “yes” or “no” next to each sentence. Choose 1. Talking Sex: Culture, gender and language use - . what is culture?. the key definitional features are that: culture

Culture and Gender - . part 1. definitions. before we get into how culture influences gender dynamics, it’s important

Culture and Gender - . chapter 2. understanding culture and communication. what is culture? the learned, shared