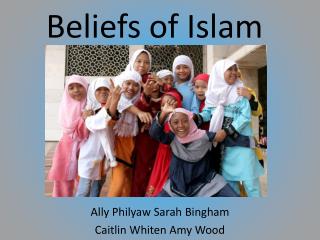 Beliefs of Islam. Ally Philyaw Sarah Bingham Caitlin Whiten Amy Wood. Basic Tenets of Islam. Belief in one and only God, without any partner, companion, etc. Belief in Muhammad as the prophet and Messenger of God Belief in the Five Pillars of Islam Belief in the Six Articles of Faith

The Religion of Islam - . submission to god’s will. the youngest of the three religions followers are called muslims.

THE RELIGION OF ISLAM - . special series: the spread of islam the afterlife the koran (encourager of peace or violence?)

Islamic Beliefs and Practices - Revelations of muhammad recorded in the quran. islamic beliefs and practices. shari’ah

Muslim Beliefs and Practices - . 5 pillars - practices. saying the creed praying five times a day fasting in the month of