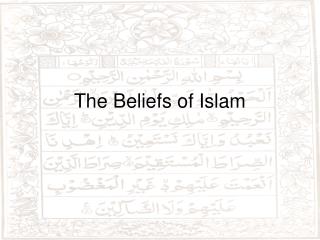 The Beliefs of Islam. 7.2.2. Trace the origins of Islam and the life and teachings of Muhammad, including Islamic teachings on the connection with Judaism and Christianity. 7.2.3. TODAY’S OBJECTIVES: Locate and describe Arabia in the period before the rise of Islam. - Islam. today’s objectives:

Allie Winiecki - What are the major religious beliefs of islam, why did certain religious groups feel that revolution

ISLAM - . beliefs and practices. the five pillars: five duties at the heart of the faith “ there is no god but allah

Ismaili Islam - By emily and stacey. ismaili islam. history of islam and muhammad aga khan the difference between the

The Birth of Islam - . the basic tenets of islam. the purpose of all islamic teachings is the cleansing and purification

Islam - . march 2012. islam. the word “islam” means “voluntary submission to god” a follower of islam is called a

TODAY’S OBJECTIVES: Locate and describe Arabia in the period before the rise of Islam. - Islam section 1: the rise of

Islam - . preliminary course revision. principal beliefs. students learn about: the articles of faith explained in the

SS6G11 B: - . major religions in europe:. judaism, christianity, and islam. home to many religions they have 3 main