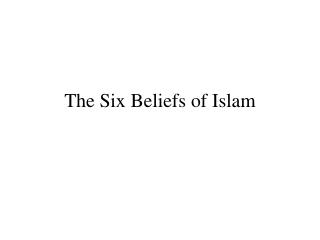 The Six Beliefs of Islam The Six Beliefs of Islam. Islam & Muslim. Islam means submission. A Muslim is one who submits to Allah. The Six Beliefs. The Hadith - sayings of the Prophet - says : You must believe in Allah, his angels, his holy books, his messengers, in the Last Day and life after death."

The Six Beliefs of Islam

Islam - . what do muslims believe. demographics. originated in saudi arabia 23% of the world (christian = 33%). islam’s

ISLAM: Submission to the Will of God - . the judeo-christian foundations of islam. origins of the faith. mohammed 570-632

BELIEF in the HOLY BOOKS - . outline. what does ‘holy book’ mean? how many holy books are there? books that we know