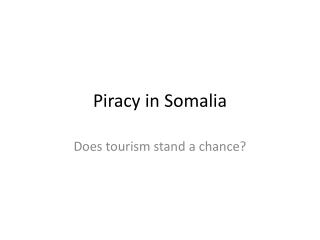 Piracy in Somalia. Does tourism stand a chance?. Somalia in Focus. Located in Capital Population : Life expectancy is Around 1960, seen as a great example by the west of Tourist hot spot. Somalia. Political instability and war plague the country Piracy in Somalia: The Drastic Effects of Post-colonalism - . stefan martynkiw. somalia in the news. the piracy in the

Piracy in Somalia: The Drastic Effects of Post-colonalism - . stefan martynkiw. somalia in the news. the piracy in the

PIRACY IN TANZANIA : - T o p i c. piracy in tanzania : . group 2. scope of discussion. 1. background of the problem and