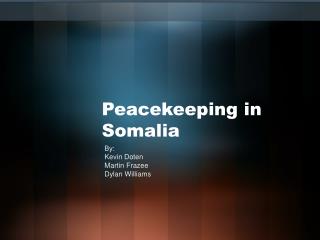 Peacekeeping in Somalia. By: Kevin Doten Martin Frazee Dylan Williams. Colonization. First inhabited by large clan-families These clans had up to 1 million members They had no hierarchy of power nor were there different classes of people within and between the clans. Peacekeeping - . and canada’s role. 1940s. canada played a special role as a ‘peacekeeper’ to prevent outbreak of

Piracy in Somalia - . does tourism stand a chance?. somalia in focus. located in capital population : life expectancy is