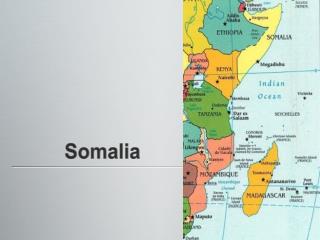 How can all of the people in the world be fed? - . food distribution problems. war. famine often accompanies war or

SOMALIA - By: tyriek baucom. somalia. somalias pirates. somalia is a poor country,so they have a lot of pirates to rob

Famine in somalia - . geum bin lee. what is famine?. severe shortage of food over a large area hunger , s tarvation ,