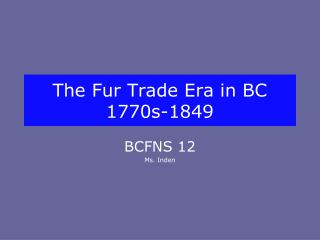 The Fur Trade Era in BC 1770s-1849. BCFNS 12 Ms. Inden. First Nations Trade. Remember that First Nations traders were already established in North America and traded many goods between themselves before the Europeans came along- including furs. Nuxalk-Dakelh Grease Trail.

The World Trade Organization – WTO – - . a rules-based, member-driven organization. “its main function is to ensure