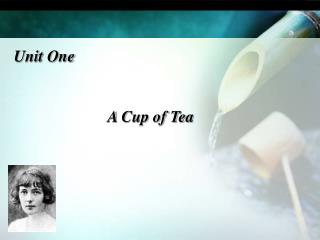 Unit One. A Cup of Tea. A Short Story: A Cup of Tea. A Cup of Tea is a 1922 short story by Katherine Mansfield. It was first published in the Story-Teller in May 1922. It later appeared in The Dove's Nest and Other Stories. Literary Elements. Setting ( 背景 ） Character （ 人物 ）