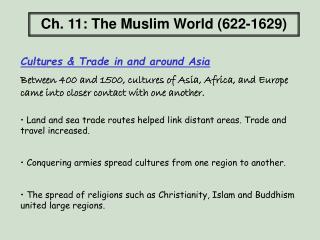 Ch. 11: The Muslim World (622-1629). Cultures & Trade in and around Asia Between 400 and 1500, cultures of Asia, Africa, and Europe came into closer contact with one another. Land and sea trade routes helped link distant areas. Trade and travel increased.