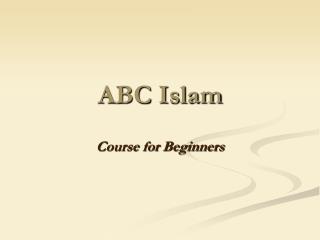 How To Break Black Magic In Islam, 7891181883 - Http://www.muslimblackmagic.com/how-to-break-black-magic-in-islam/ black

Islam ABC Book - . john avila period 6 10/11/09. a for abbasid. the abbasid caliphate was the third of the islamic

Muslim Empires - . suleiman the magnificent. in the late 16th century the ottoman empire had 27 million people who spoke

TRADE IN ISLAM - . dr. alimi saheed cife,cissa,cifa. trade transactions. trade is permissible according to the quran,

Islam - . five pillars of islamic faith. profess and say publically, “there is one god, allah and muhammad is his

I. Arabia Before the Prophet II. Muhammad, Prophet of Islam III. Islamic Faith and Law - Iv. the expansion of community

Ismaili Islam - By emily and stacey. ismaili islam. history of islam and muhammad aga khan the difference between the