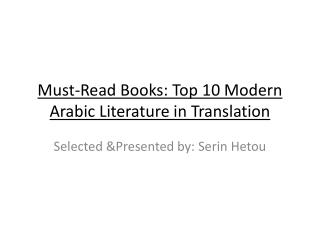 Must-Read Books: Top 10 Modern Arabic Literature in Translation. Selected &Presented by: Serin Hetou. The view of the orient: desert, exoticism, illiteracy, nomad, and A Thousand and One Nights . Contemporary Vista of the Arab world.

How to Read Literature Like a Professor by Thomas C. Foster - . a lively and entertaining guide to reading between the