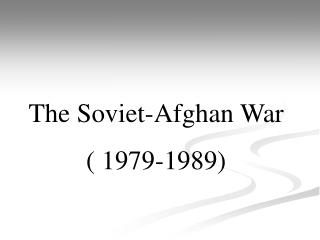 The Soviet-Afghan War - . synopsis. the soviet-afghan was a nine year long conflict which involved the soviets supporting

Soviet Intervention during the Cold War - . over the next couple days, we are going to address some common needs in

The Afghan army - On the frontlines with the afghan national