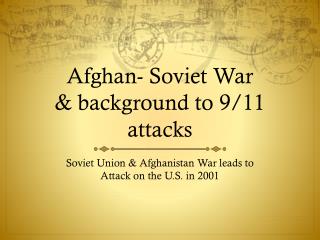 Afghan- Soviet War & background to 9/11 attacks. Soviet Union & Afghanistan War leads to Attack on the U.S. in 2001. Afghanistan bordered the USSR. In order to understand Osama Bin Laden and why he attacked the U.S. in 2001, we must begin with a conversation of the country of Afghanistan ! CENTRAL ASIA - . afghanistan. by brittany adler. the soviet invasion . soviets invade afghanistan in 1979. led to the

Denial of Service Attacks Targeting U.S. Financial Institutions - . january 2013. agenda. what is ddos who’s behind the

Soviet Union… The End - . soviet union… the end. mikhail gorbachev became the leader of the soviet union in the late