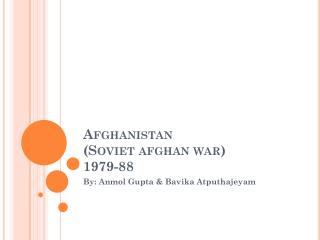 Soviets in Afghanistan - . lesson 75. background. since 1945, afghanistan had been firmly in the soviet sphere of

The Soviet-Afghan War - . synopsis. the soviet-afghan was a nine year long conflict which involved the soviets supporting

WAR IN AFGHANISTAN - . war in afghanistan. october 7, 2001 united states, the united kingdom, australia, and the afghan

Fall of the soviet union - . soviet/afghan war afghanistan rebels, known as the mujahideen , wanted to overthrow the

War on Terror - . united states and its war on terror. soviet war: rise of a nation. entire afghan nation rose in arms. 6

Marriage in Afghanistan - . sophia fergione. laws that govern afghan weddings. girls are allowed to marry once they turn

Afghanistan The Facts - . by sam lawson. afghanistan is in southwest asia and is slightly smaller than texas. afghan