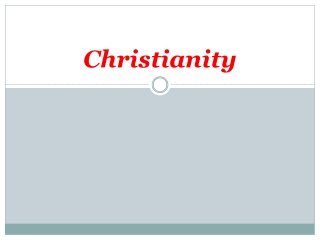 Christianity. Christianity is a monotheistic religion centered on the life and teachings of Jesus as presented in the New Testament.

The East- An Empire and a Religion - . events from approx. 476-1453 ad in the eastern roman empire (byzantine) arabic

Early Middle Ages - Europe - . outline – write each heading then skip a line or 2 for the next one. vikings william the

The Transition from Fall of Rome to Middle Ages - . by: matt pierson and c.j. penhaligen. background of the roman empire.

World After Rome - . roman empire does not vanish leaves three heirs much of political, social, economic and intellectual

5 . The Middle Ages - Worship and its architectural setting. 5 . the middle ages. from the 6 th c. liturgy was more

Preview Main Idea / Reading Focus The Rus and Kiev Map: The Growth of Russia - Christianity in russia russia under

Chapter 8: The Byzantine Empire - . fall of rome. the decline of rome. life after the 5 good emperors death of marcus

The Spread of Christianity and Rise of Eastern Europe - . chapter 9 (4 of 4). through missionaries, the byzantines spread