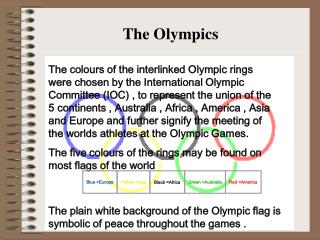 The Olympics - . origin of the ancient olympic games. an athletic and religious celebration held in olympia held every

The Olympic Hendiatris: The famous 3-part motto of the Olympics - . if you are a member of the us olympic planning

THE OLYMPIC GAMES - . the first olympics were held in greece in 776 b.c. the stadium in olympia. ancient olympia

History of the Olympic Games - . read the words after me and then translate the words. olympia; 2. olympiad; 3. the

The Making Of The Olympics!!!!!  - . look at how the olympics began! presented to you by: harjot, johnny

THE OLYMPIC GAMES - . objectives in the two lessons on the olympics you should learn about:- the history of the ancient

The Olympics - . history . the ancient greek games first recorded olympic games took place in 776 bc in the town of

The Olympic Games - Ancient games and the modern games the ancient olympics began in 776 bc at olympia, greece

Presentation Download Link - . helping you achieve your definition of success. is our pride and joy. everything you