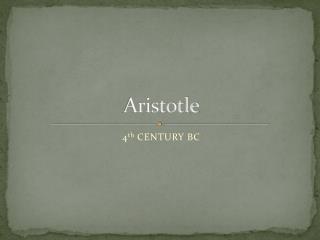 Aristotle. 4 th CENTURY BC. Aristotle & Socrates Can you guess who is who and why?. Aristotle. Aristotle’s basic question as he put it, was ‘The question asked a long time ago, and is being asked now and it remains a difficult one is this: ‘ What is that which exists?’ Aristotle - Lecture 03. aristotle. born at stagira,a greek colonial town near aegean in 384 b.c. he was a

Aristotle - . tragedy and the tragic hero. aristotle’s life. student of the philosopher plato teacher to alexander the

Aristotle: - . metaphysics &amp; epistemology. why do we ask these questions?. &quot;a sense of wonder started

Aristotle - . aristotle was one of the first people to believe that the world was not flat. philosopher. john 12/20/12.

Aristotle - . the dilemma. we have been stuck with a bit of dilemma: (mill) if we morally judge actions based on their

Aristotle - . by: manvir gill and kaljeevan kahlon chemistry 11. personal life. aristotle was born in 384 bc in stagira

Aristotle - . by: forrest meyer. aristotle’s research. raphael's school of athens, in the center plato (left) and

Aristotle - . archeological remains of lyceum . aristotle’s four causes. material cause : the matter our of which it