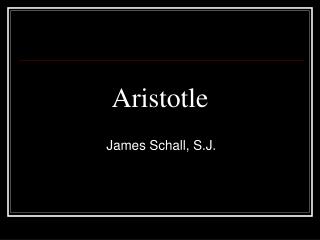 Aristotle James Schall, S.J. Life, Legacy, and Times Aristotle’s father was court physician to Philip of Macedon, father of Alexander the Great. Aristotle studied under Plato and his thought shared Plato’s concern over form though in opposition to Plato, form was located in time and space.

Aristotle - . some facts about aristotle. lived from 384-322 plato’s best student at the academy father was a physician

Aristotle - Lecture 04. aristotle. catharsis. epic and dramatic poetry provide a healthy direction and chastening of the

Lecture 9 - . aristotle (384-322 bce). aristotelian justice. justice, for aristotle (as for everyone else) is about who

Aristotle - . robert hoover a-4 4/29/13. background. student of plato and teacher of alexander the great. he was a greek