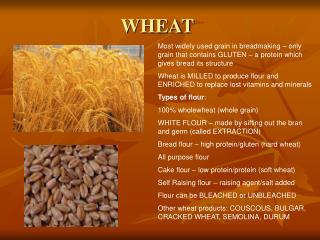 WHEAT. Most widely used grain in breadmaking – only grain that contains GLUTEN – a protein which gives bread its structure Wheat is MILLED to produce flour and ENRICHED to replace lost vitamins and minerals Types of flour : 100% wholewheat (whole grain)