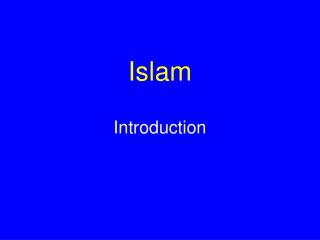 ISLAM IN AMERICA - . discussion group based on the book, “islam in america” by jane l. smith sponsored by unity of

Islam is peace, Islam is ease, Islam's not danger or disease. Islam is love and prosperity. Islam's not hatred or - Ity.

Islam - . who is muhammad and what do he represent in islam?. last and greatest of the prophets. list the five pillars of

Islam: A History - . world religions: fr. llane briese. group discussions. what are some of your attitudes regarding

Islam - . islam in context. islam is the third of the major monotheistic religions founded in sw asia islam, judaism and

The Coming of Islam - . islam and indonesia. starter list three aspects of an empire what is the difference between an

Introducing Islam - . in the name of god; the most merciful the most compassionate. islam. the arabic meaning of islam is