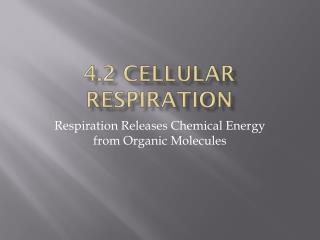 4.2 Cellular Respiration. Respiration Releases Chemical Energy from Organic Molecules. What is a Metabolic Pathway ?. A metabolic pathway is a series of linked chemical reactions that occur in cells. Each reaction is catalysed by its own specific enzyme.

PHOTOSYNTHESIS AND CELLULAR RESPIRATION - . we will examine the exchange of oxygen and carbon dioxide between living

Cellular Respiration and Photosynthesis - . *the respiratory system carries oxygen to the circulatory system. *the

Photosynthesis &amp; Cellular Respiration - . photosynthesis. the process by which energy from the sun is used to