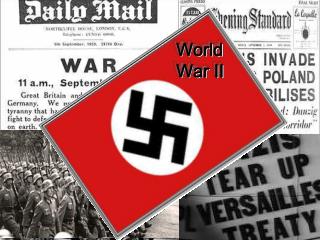 World War II. World War II. Long-Term Cause # 1: The Versailles Treaty. Germany was forced to pay reparations for damages caused in the war. $32 Billion Dollars Germany had to reduce its military and demilitarize the Rhineland. 100,000 Soldiers, no U-boats, no Air Force, reduce its Navy World War II - . in what ways did the peace settlement with germany at the end of world war i make a new world war with

World War II - . part one. essential questions : what caused world war ii? what were the major events during world