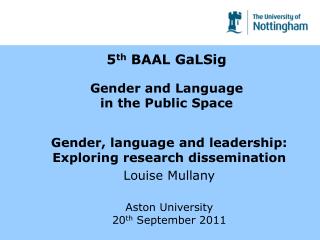 Public Administration - 3.2 defensible space: a new physical planning tool for the urban revitalization what is

From Research to Practice Examining Gender Differences to Increase Success for All - . presentation to the american

Technology, Markets, Space - . lessons from the calumet region. myths of the information age. geography is irrelevant