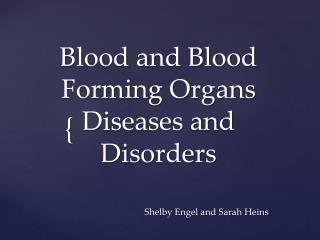 BLOOD DISORDERS - . carbon monoxide poisoning. co binds to your hemoglobin , prevents oxygen from binding.  can be

Blood disorders - . what is hematology?. hematology is the study of blood and is concerned mainly with the formed

Blood cells Disorders - . leucocytosis: a raised wbcs count. due to elevation of a single lineage. neutophilia:

BLOOD AND BLOOD STAINS - . importance of the study of blood. as circumstantial or corroborative evidence against or in