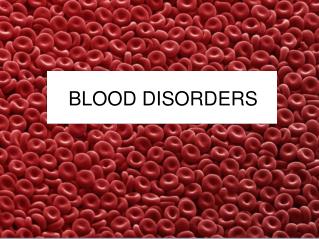 BLOOD DISORDERS. Carbon Monoxide Poisoning. CO binds to your hemoglobin , prevents oxygen from binding.  Can be fatal.   It is a "silent killer" as people often die in their sleep when a heater fails. Carbon monoxide deaths are more likely to occur in winter Blood disorders - . what is hematology?. hematology is the study of blood and is concerned mainly with the formed

Blood cells Disorders - . leucocytosis: a raised wbcs count. due to elevation of a single lineage. neutophilia:

Red Blood Cells Disorders - . objectives: to study the features and causes of anemia due to blood loss, hemolysis and

Listing of Blood Disorders - You'll have light indications and also signs of thalassemia if you inherit one altered gene.

Listing of Blood Disorders - Blood clotting tests. there is no clear age that distinguishes between more youthful

List of Blood Disorders - Types of thalassemia. some clots can take place spontaneously and without noticeable cause,