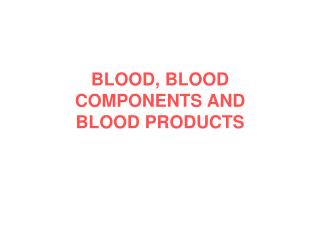 BLOOD, BLOOD COMPONENTS AND BLOOD PRODUCTS. Most blood collected from donors is processed as follows: ■ Blood components , such as red cell and platelet concentrates, fresh frozen plasma (FFP) and cryoprecipitate, are prepared from a single donation of BLOOD AND BLOOD PRODUCTS - . hni 364 professor patricia voelpel. blood typing. a b ab o what is rh factor and what does

Blood Components - . overview. there are 4 main components within blood that we are concerned with: red blood cells white

Standard 7 – Blood and blood products - . philippa kirkpatrick april 2013. why a blood standard?. there are inherent