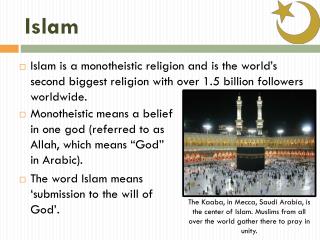 Islam. Islam is a monotheistic religion and is the world’s second biggest religion with over 1.5 billion followers worldwide. Monotheistic means a belief in one god (referred to as Allah, which means “God” in Arabic). The word Islam means ‘submission to the will of God’.