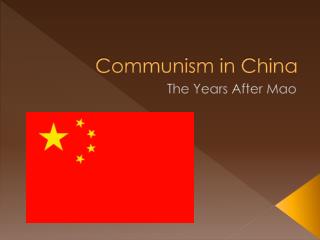 Communism in China. The Years After Mao. Death of Mao Zedong. Mao Zedong’s dies in 1979 China is far behind other industrialized nation. Power Struggle. Chapter 11: Between the Wars Fascism, Communism, Dictators &amp; the Road to WWII - . images capturing an era.

CAPITALISM VS. COMMUNISM “BrainPop: Communism” video worksheet I. Definition of communism - Communism is an economic