China and the Rise of Communism - PowerPoint PPT Presentation 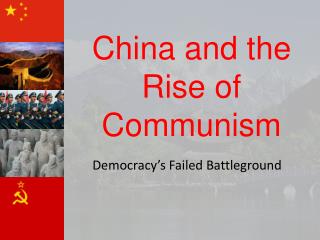 China and the Rise of Communism. Democracy’s Failed Battleground. Big Trouble in Little China. The Fall of the Qing Dynasty (1911) Loss of the Sino-Japanese War in 1895 Boxer Rebellion of 1900 Influx of Western powers in the 1900s Significant social changes after rebellions

Communist Nation - From vietnam to cuba via north korea and russia, a look at the culture of

Mao Zedong and China: Origins and Rise to Power - . ib history: authoritarian and single-party states. about the

China and the rule of Mao - . dynastic china . powerful emperors ruled china for thousands of years with the mandate of

Outcome of the competition between Communism and Capitalism - . the vietnam war. the cold war lasted from the end of ww2

Class Notes: Democracy or Communism? China’s Economy - . china’s economy since 1978, china has shifted from a

The chinese communist revolution - . background. china becomes a republic in 1911 under sun yat-sen republic must work to