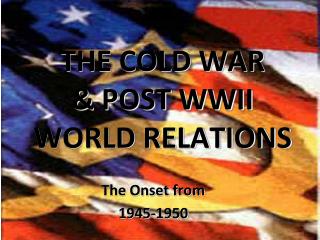 THE COLD WAR & POST WWII WORLD RELATIONS. The Onset from 1945-1950. II. Two Major Meetings to decide the Postwar Setup of the World. Yalta & Potsdam. Remember YALTA?. 1. February 1945. ***The Yalta Conference was seen as the beginning of the Cold War.

The Cold W ar - . germany &amp; japan transformed. both germany and japan had been physically and socially devastated

Unit 10 World War II and the Cold War- Answers - . complete the guided reading as you view the power point. unit 10:.