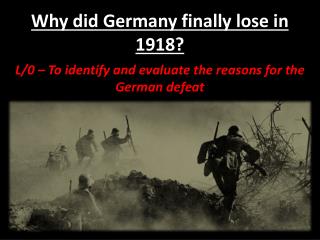 Why did Germany finally lose in 1918?

Why did Germany finally lose in 1918? - PowerPoint PPT Presentation Why did Germany finally lose in 1918?. L/0 – To identify and evaluate the reasons for the German defeat. Events in 1918 - Timeline. The situation at the end of 1917. At the end of 1917, there was stalemate on the Western Front. However the Allies were in deep trouble:

Why did Germany finally lose in 1918?

Germany - Tysean clark. germany. militarization of the rhineland - march 1936. demilitarized by effects of the treaty of

Germany 1918 - 1920 - . the aftermath of wwi problems for the new government the sparticist rising the the weimar

GERMANY - . if you could not tell, the background is a german flag. which makes sense. cynthia rodriguez donald pauley

Why did Germany and her Allies lose WWI? - . german tax system. germany’s federal tax system meant it was unable to

Germany - . characteristics:. affluent economy (despite the disequilibria between the eastern and the western parts of

Germany - . by jinghan. traditional clothes in germany. many germans’ everyday clothes are just like ours. only

Germany - . kelsey perkins environmental science. a map of germany. germany information. in the slide before shows the

Be Alert Before To Go for 21 Day Fix - There are many people who are looking to lose weight, but even after trying hard,