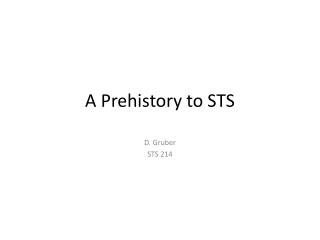 A Prehistory to STS A Prehistory to STS. D. Gruber STS 214. What is Science?. Standard definition: “ Science” is…? The “scientific” is …. Some phrases to consider. “Science is a formal activity that creates and accumulates knowledge by directly confronting the natural world .”

A Prehistory to STS

Chapter 1 Lesson 1 Vocab: - . prehistory: the period of time before people began to write. archaeology: the study of

History of the Internet - . zhonghong ou aalto university school of science and technology. history of the internet.

Use a #2 pencil and mark the correct answer on a half-size brown scantron sheet. - Ics 45 – midterm exam - culture