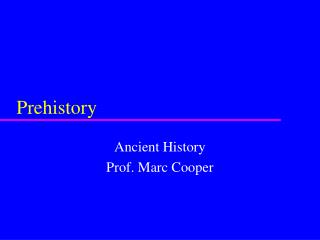 Prehistory. Ancient History Prof. Marc Cooper. Prehistory. Cayonu, one of the earliest Neolithic sites. Problems. Where and when do we find the earliest agriculture? What mechanisms produced plant and animal domestication?

Human Evolution and PREHISTORY - . part iii: evolution of the genus homo and the development of early human culture.

PREHISTORY - . period in which our ancestors existed on earth but had not yet invented writing our knowledge of them

Prehistory - . the big bang theory. about 15 billion years ago a tremendous explosion started the expansion of the

Prehistory is the time before written records were kept. - Standard whi.2a the student will demonstrate knowledge of

Prehistoric Art - . what is prehistory ?. according to randall white, “a kind of floating scale that refers in any

Prehistory - . what is prehistory?. the period before recorded history. items from that time period are called

Chapter 1: From Human Prehistory to the Early Civilizations - . objectives examine the indicators of civilization,