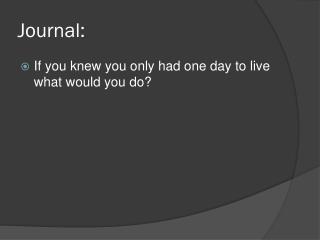 Journal:. If you knew you only had one day to live what would you do? . The Cuban Missile Crisis, 1962. “What Happened at the Bay of Pigs?”. 1. According to the reading, the idealism of the Peace Corps covered up what? 2. What was the goal of La Brigada /The Brigade?